BALLPOINT ADVENTURES for 4/26/99: Sometimes Billy Thinks Like a #Republican.

Sometimes Billy thinks like a Republican.  What other party likes to ruin it for everybody?
Seriously--Republicans think everyone is out to get them--when really it's just a tiny fraction of humanity.  They initiated two wars on the grounds that a handful of extremists got lucky.  Rather than just tightening up their own intelligence-gathering agencies, they make all of us put up with absurd security measures that do nothing to keep us safe and police armed so well, they're about to invade an Iraqi suburb.

Of course, Democrats want to ban guns because of a tiny handful of psychos.

I think we should ban guns because of cops.  Cops seem to make more headlines for murdering citizens these days than psychos do.  Or, institute mandatory gun training for all American citizens whether we want to use a gun or not.  If we all learn how to respect guns, I honestly do believe we can see an America without so much gun violence.  Honestly, just banning their manufacture would be an easier way to go.

Regardless, the point of this strip was to show how absurd it was to label as psychos, all people who dressed like psychos.  If I recall correctly, it was the Columbine Massacre that inspired this strip.  The two gunmen (gunkids, really) were members of the "trench coat mafia" at their school.  It's a tragic case, obviously, but it's a mistake to assume the worst in people just because you think you see a pattern.  Wearing a trench coat and listening to depressing music is not a sign of a killer waiting to kill.  It's a sign of nothing but an interest in trench coats and music by The Cure.

Buy the 20-page INKSTREME BALLPOINT ADVENTURES comic!  Now available at MagCloud.com!  Just $5 for a meatspace version (print) and a skinny $1 for a ebook/PDF version!  Do it now and you'll have access to your very own copies of some of my favorite strips from over the years, along with special extended versions of strips not available on the site.  Here's the cover: 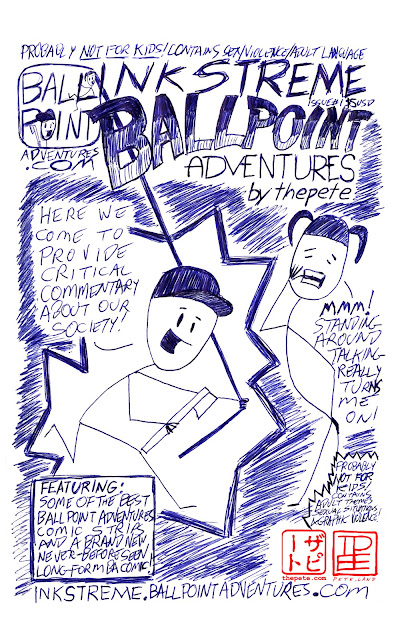 Isn't it sexy? Go buy one for yourself!