See the irony here is I was one of those guys in line for PHANTOM MENACE tickets back in 1999.  I wasn't quite as early as these losers, but...
...I did wait something like 5 hours in line for tickets when they first went on sale.  I remember taking the afternoon off from work and everything.  These "losers" I referred to got opening day 12:01am tickets, but I got opening day 3:30am tickets and considered myself hardcore in another way.  Of course, then we saw PM...

...and loved it.  Yep, my wife (then fiancee) and several of our friends and I were just so pleased to have a new STAR WARS film to get lost in that we weren't bothered by Jar-Jar hardly at all and the vague plot didn't even occur to us.  I'd see it two more times in the theater before I started to realize how much crap it was.  By the fourth viewing, I decided I would see it several more times to break my record of times I had seen a single film in the theater, so I hunkered down and started enjoying the screenings like the characters on MYSTERY SCIENCE THEATER 3000.  I still have all of my quips in my head for the next time I watch PM.  Which will hopefully be never.

What was that record of mine?  I saw the first Tim Burton BATMAN ten times in the theater.  It was equally crap, but I was a hardcore comic geek.  So, yes, I saw PM 11 times in the theater.  Ugh... I think I must be a sadist.  Luckily, back then, movie tickets were MUCH cheaper and I think a couple of the screenings I went to were matinees and a couple others were in a discount theater.

But after all that, I really came back to agreeing with Billy on this topic.  It's ridiculous to get in line days, weeks, or months in advance for a movie.  Sure, seeing it first is fun, but I saw PM second and it didn't stop me from enjoying it or, ultimately, realizing it was awful.

Head over to inkstreme.ballpointadventures.com and buy yourself the first long(ish)-form comic starring Billy and Barbie Ballpoint!!  Just $5/print $1/ebook!  Do it now! 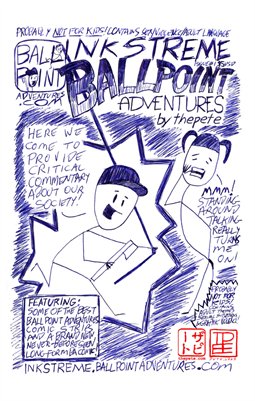